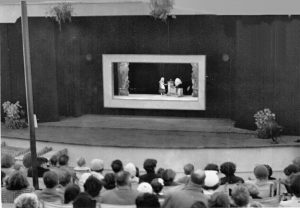 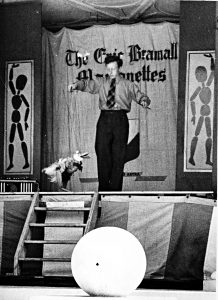 Before the Harlequin theatre was built in 1958 Eric Bramall usually had a seaside booking for the whole of the Summer Season, but during the rest of the year travelled with his mother performing in Variety and touring the very many  Music & Arts Societies which were in most towns and villages throughout Britain.

I mention this because I was reminded of those early days by a phone call. It was from a retired amateur puppeteer, Mal Trott, living in the Midlands who had read in “The Stage” newspaper of the Fire at the theatre and he was ringing to express his sympathy. He had visited the theatre once, in the early 90s but his memories of Eric Bramall went back to 1955 when he was living in Scarborough. Eric had performed there for week in small hall. Mal’s father was custodian of this hall and thus Mal, twelve years old at the time, watched every show during the week. This fired his interest in puppets which became a consuming interest for the rest of his life.

For those who don’t know, Eric Bramall was my partner for 40 years.  It was Eric who built the theatre and encouraged, inspired and enthused me throughout our collaboration until his death in 1996. Any skill I have with marionettes came from watching Eric but I will never be his equal.

The pictures show The Eric Bramall Marionettes in Eirias Park, Colwyn Bay 1956 and on the bandstand of Vale Park, Wallasey 1949