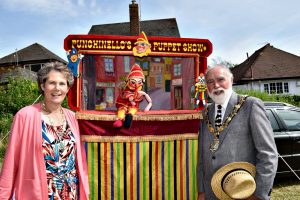 St Bridgets on the Wirral is a very old church, a Primary School and an enthusiastic Community who every year put on a  St Bridgets Summer Fair towards the end of June. For the past four or five years that I’ve been attending with my Punch & Judy show the event has been blessed with sunshine. It’s a fairly low key event with perhaps only dozen stalls, a bouncy castle and Punch & Judy, a burger barbeque and a stall offering strawberries and cream.. They have a brass band, handbell ringing demonstrations in the church, and Maypole Dancing by children from the school. It is always well supported and is one I look forward to each year. It has  a reassuring timeless feel and is not all that different from the Garden Party in the Vicarage garden which I remember as a child, although in those days we didn’t have a brass band, or a Punch & Judy for that matter,  but we did have a bran tub!

This year the Fair was opened by the Mayor of the Wirral (The Wirral being a Metropolitan Borough I learned). He and the Mayoress stayed for the whole afternoon. I had just finished my last show and was beginning to pack up when the Mayor’s minder (there must be some official title but I don’t know it) came to ask if Mr Punch was still available for a photograph with the be-chained couple. Of course Punch agreed, well he’s always been a supporter of Civic Authority, and he cheekily asked for a copy of the picture. The Mayoress asked for a business card, so can we look forward to a summons to the Mayor’s Parlour?